GitHub Actions: How to run SSH commands (without third-party actions)

Recently, I’ve been using GitHub Actions for my Continuous Integration and Continuous Delivery. Often, I use a simple deployment process that consists in executing remote commands on the target server. 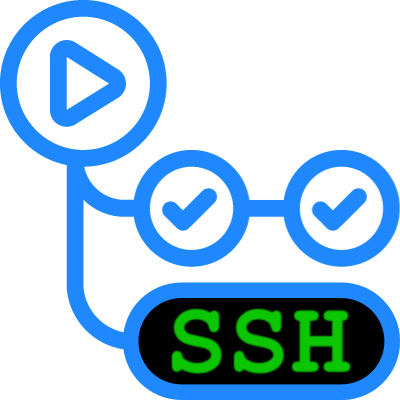 I found two third-party actions in the marketplace:

Here is what I dislike about them:

Finally, I settled on the following solution: calling the ssh command directly from the workflow.

However, before we can call ssh, we need to configure a few things:

Of course, we’ll not store these values in the source code (at least, not the private key); instead, we’ll use the repository’s secrets.

To do that, we’ll’ begin the job with an additional step that creates the private key file on the runner, as well as an SSH configuration file.

To create the private key file, we simply need to echo the key’s content and make sure we set the right permissions:

To create the SSH configuration file, we could use echo as well, but I think it’s simpler with cat:

As you can see, this file defines the alias staging for the target machine (“staging” is just an example; you can use “deploy”, “production”, or anything else). To this alias, it binds the hostname, the username, and the private key.

It also sets StrictHostKeyChecking=no to avoid the infamous error Host key verification failed. If you think this is not secure, you can set the target footprint in ~/.ssh/known_hosts the same way we created the private key.

Here is the complete workflow:

A few remarks on this workflow:

As you can see, this simple technique allows us to copy files and execute commands on a remote host. Thanks to the alias defined in .ssh/config, we can split a job into several steps with minimal code duplication.